Systems Biology and its tools

Posted on 13. May 2011 by Vince Giuliano
Victor’s recent blog entry Living on the Brink of Chaos points to Systems Biology, a relatively new research perspective likely to be of increasing importance. Here, I introduces Systems Biology a bit more systematically and briefly characterize some of the many tools of mathematics and systems theory that may be used in it – tools traditionally considered to be useful outside the biological-life sciences.
Systems Biology
Systems biology characterizes an approach to understanding focused on patterns of interaction of systems components rather than the traditional reductionist research approach of focusing on one process, substance, gene or even subsystem at a time. “Proponents describe systems biology as a biology-based inter-disciplinary study field that focuses on complex interactions in biological systems, claiming that it uses a new perspective (holism instead of reduction). — An often stated ambition of systems biology is the modeling and discovery of emergent properties, properties of a system whose theoretical description is only possible using techniques which fall under the remit of systems biology(ref).” These techniques include mathematical methods for finding patterns in large diverse collections of data and approaches for building large complex computer models of biological systems. I describe several of such below.
We already have many simple partial models of how things work in bodies relating to health and aging, examples being the role of microglia in neuropathic pain, longevity and the GH–IGF Axis, tumor suppression by the NRG1 gene, PGC-1alpha in the health-producing effects of exercise, how DAF-16 promotes longevity in nematodes, the cell-cycle roles of JDP2, and CETP gene longevity variants. These are a sample of mostly-qualitative models previously discussed in this blog, drawn out of a pool of thousands of such existing partial models. Some of these partial models are in themselves very complex and it is not clear whether and how how many of them fit together. Along with those simple models we have petabytes of possibly relevant data coming from association studies, genomic and other studies and next-generation sequencing technologies spewing out daily mountains of new data(ref). By the early-2000’s it was clear that there was a need for approaches to building higher-level quantitative models and develop new techniques for analyzing vast quantities of data. Thus arose the interest in Systems Biology.
Another basic motivation for using Systems Biology approaches is that when it comes to considering health and disease states and aging, the relationships are far from simple and it is often not possible to say what is causing what.   Very rarely can we simply and accurately state “A causes B.“ That is why genome-wide SNP-disease association studies have tended to show only disappointingly weak correlations. “Nevertheless, the inauguration of genome-wide association studies only magnifies the challenge of differentiating between the expected, true weak associations from the numerous spurious effects caused by misclassification, confounding and significance-chasing biases(ref).”   Indeed, most health and disease states appear to come about through a time and sequence-dependent set of interactions among very large numbers of variables.  The mTOR, SIRT1, AMPK, and IGF1 pathways all have to do with aging and longevity and themselves are incredibly complex. Yet, perturbations in any one of these pathways can affect the others as well. Thus, to discover what is going on, Systems Biology as a philosophy often draws on tools of systems modeling.
“Systems modeling is the interdisciplinary study of the use of models to conceptualize and construct systems in business and IT development.[2]” The same can be said for all kinds of biological systems. “– A common type of systems modeling is function modelling, with specific techniques such as the Functional Flow Block Diagram and IDEF0. These models can be extended using functional decomposition, and can be linked to requirements models for further systems partition(ref).”
The 2004 publication Search for organising principles: understanding in systems biology relates: “Due in large measure to the explosive progress in molecular biology, biology has become arguably the most exciting scientific field. The first half of the 21st century is sometimes referred to as the ‘era of biology’, analogous to the first half of the 20th century, which was considered to be the ‘era of physics’. Yet, biology is facing a crisis–or is it an opportunity–reminiscent of the state of biology in pre-double-helix time. The principal challenge facing systems biology is complexity. According to Hood, ‘Systems Biology defines and analyses the interrelationships of all of the elements in a functioning system in order to understand how the system works.’ With 30000+ genes in the human genome the study of all relationships simultaneously becomes a formidably complex problem.”
The 2007 document The nature of systems biology puts it “The advent of functional genomics has enabled the molecular biosciences to come a long way towards characterizing the molecular constituents of life. Yet, the challenge for biology overall is to understand how organisms function. By discovering how function arises in dynamic interactions, systems biology addresses the missing links between molecules and physiology. Top-down systems biology identifies molecular interaction networks on the basis of correlated molecular behavior observed in genome-wide “omics” studies. Bottom-up systems biology examines the mechanisms through which functional properties arise in the interactions of known components.”
Aging in particular is clearly a systems phenomenon. A search in Pubmed.org for papers relevant to “systems biology and aging” retrieves 862 entries. Shown here is a nice model of human aging, a diagrammatic network model developed by John D. Furber. A larger more-readable version of the diagram with accompanying discussion can be found here. 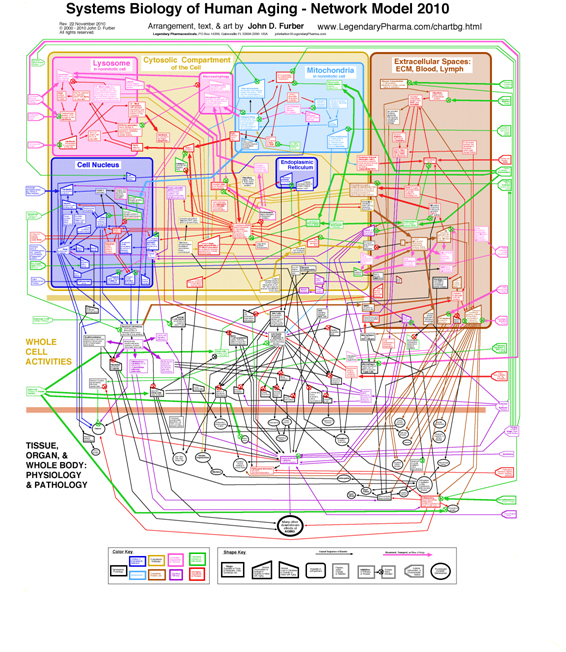 2 Responses to Systems Biology and its tools