The epigenetic regulation of telomeres

Posted on 27. March 2011 by Vince Giuliano
This blog entry focuses on a specific aspect of telomere biology, the epigenetic regulation of telomeres as mediated by TERRA, a recently-discovered RNA. Most popular discussions related to telomeres and telomerase are still based on simplistic earlier models of telomerase biology which do not take TERRA into account. So are the increasingly-popular commercial approaches to telomere lengthening via “telomerase activator” substances. The new TERRA-related research may explain how diet, certain supplements and lifestyle factors like exercise so profoundly affect telomere lengths and can inhibit cell senescence.
First, as a preamble or appetizer for what follows, regarding the relationship of telomere length and aging I invite you to view this 3-minute video.
Background on telomeres and telomerase.

Although this blog entry focuses on epigenetic regulation as a new and very important aspect of telomere biology, I continue to stand behind what I have written related to telomeres and telomerase reflecting a shift over a three-year period. The most-recent relevant blog entries were written in October 2010: Telomere lengths, Part 3: Selected current research on telomere-related signaling, telomere lengths, cancers and disease processes, Part2: lifestyle, dietary, and other factors associated with telomere shortening and lengthening, and Part1: telomere lengths, cancers and disease processes. These entries contain a great deal of information as well as links to multiple earlier blog entries on telomeres and telomerase. And, of course, the 12th theory of aging discussed in my treatise is Telomere Shortening and Damage. Three years ago, I thought that taking astragaloside IV or cycloastragenol supplements to extend telomeres was possibly a good anti-aging intervention. I no longer see that as the case.
In the abovementioned Part 3 blog entry I discussed how damaged or too-shortened telomeres can lead to epigenetic changes. “Another important contribution to the picture of how cell senescence affects aging is provided by the October 2010 publication Reduced histone biosynthesis and chromatin changes arising from a damage signal at telomeres.
“During replicative aging of primary cells morphological transformations occur, the expression pattern is altered and chromatin changes globally. Here we show that chronic damage signals, probably caused by telomere processing, affect expression of histones and lead to their depletion. We investigated the abundance and cell cycle expression of histones and histone chaperones and found defects in histone biosynthesis during replicative aging. Simultaneously, epigenetic marks were redistributed across the phases of the cell cycle and the DNA damage response (DDR) machinery was activated. The age-dependent reprogramming affected telomeric chromatin itself, which was progressively destabilized, leading to a boost of the telomere-associated DDR with each successive cell cycle.” — This same publication puts forward an important new concept: “We propose a mechanism in which changes in the structural and epigenetic integrity of telomeres affect core histones and their chaperones, enforcing a self-perpetuating pathway of global epigenetic changes that ultimately leads to senescence.” Histones, we recall, are the spindles around which DNA is wrapped, and chaperones are “are proteins that assist the non-covalent folding or unfolding and the assembly or disassembly of other macromolecular structures.” in this case the chaperones are ones that assist folding of DNA in histone structures, HSP90 being a main one discussed below.”
Rather than discussing how shortened or damaged telomeres lead to epigenetic changes, the present blog entry is focused on how epigenetic changes arising from other causes (dietary, lifestyle, aging, etc.) can affect telomere health, regulate telomere lengths, and impinge on cell senescence.
About telomere structures, shelterin and telomere binding proteins
Telomeres are commonly described as simple repeats of inert DNA at the ends of chromosomes, like the tips of shoelaces. In fact, they are quite complex structures. The 2011 publication Healthy aging and disease: role for telomere biology? Contains the following description and diagrams: “Telomeres are specialized DNA structures located at the terminal ends of the chromosomes [5]. Their primary function is to maintain genome stability. Telomeres consist of non-coding double-stranded repeats of guanine-rich tandem DNA sequences (TTAGGG) that are extended 9–15 kb in humans and end in a 50–300 nucleotide 3â€² single guanine strand overhang [6]. This overhang can fold back and invade the double-stranded telomere helix, forming a large ‘T-loop’. The T-loop facilitates the formation of a high-order structure mediating the end-capping [7] (Figure 1) (ref).” 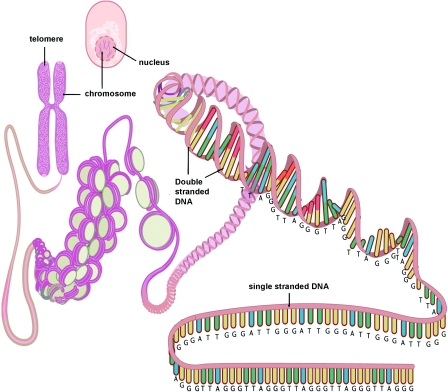 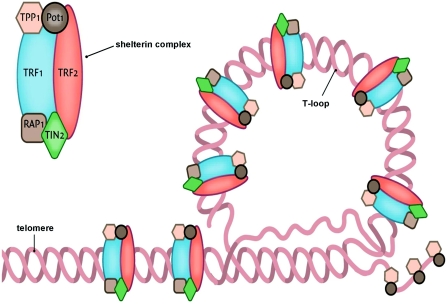 “POT1 (protein protection of telomeres 1) binds directly to the single-stranded telomeric DNA and interacts directly with TPP1 (tripeptidyl peptidase 1) [11]. Rap1 (repressor activator protein 1) binds TRF2 [12], and TIN2 (TRF1-interacting nuclear factor 2) is a central component of the complex interacting with TRF1, TRF2 and TPP1 [13,14]. The telomere complex plays a critical role by protecting the chromosomes from recognition by the DNA damage-repair system as DNA ‘breaks’ and activation of the p53 or p16INK4a pathway, eventually leading to cellular senescence or apoptosis [15](ref).”
Since these diagrams don’t show TERRA, the actual situation is even more complex. TERRA accompanies the telomeric DNA binding to TRF2.

The 2009 publication TERRA: telomeric repeat-containing RNA provides additional detail: “Telomeres, the physical ends of eukaryotic chromosomes, consist of tandem arrays of short DNA repeats and a large set of specialized proteins. A recent analysis has identified telomeric repeat-containing RNA (TERRA), a large non-coding RNA in animals and fungi, which forms an integral component of telomeric heterochromatin. — TERRA transcription occurs at most or all chromosome ends and it is regulated by RNA surveillance factors and in response to changes in telomere length. TERRA functions that are emerging suggest important roles in the regulation of telomerase and in orchestrating chromatin remodelling throughout development and cellular differentiation. — The accumulation of TERRA at telomeres can also interfere with telomere replication, leading to a sudden loss of telomere tracts. Such a phenotype can be observed upon impairment of the RNA surveillance machinery or in cells from ICF (Immunodeficiency, Centromeric region instability, Facial anomalies) patients, in which TERRA is upregulated because of DNA methylation defects in the subtelomeric region. Thus, TERRA may mediate several crucial functions at the telomeres, a region of the genome that had been considered to be transcriptionally silent.”

5 Responses to The epigenetic regulation of telomeres